Manager of Business Development in the Water Industry, Siemens AG 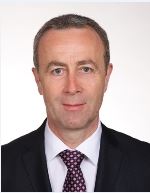 Paul Conroy has been working for Siemens for over 35 years and has been active for the majority of this time in various roles in the water industry. His early career involved engineering and commissioning the automation systems of some of the world’s largest water conveyance systems in regions such as the Middle East, North Africa and South America. The practical experience gained allowed him to subsequently take on the role of the project manager for several oil/gas/water projects in the Middle East and Africa.

His current job role includes responsibility for pre-sales and business development for Siemens water business in the booming Middle East region with a special focus on the introduction of digitalization in the traditionally conservative water market. Mr. Conroy holds a degree in Pure Mathematics and in Electronic Engineering